Even though there was no agreement, this seemed to be the un-uttered agreement. That African literature is an amorphous affair looked at differently from varying lenses. It is a kaleidoscope of perspectives and there will likely be no agreement as long as there are more than one people interested in it.

Maybe it is this idea of amorphousness that allows connections. With other people from the continent, those outside the continent, those publishing books, editors, playwrights, poets, even students. With all these eyes maybe there cannot be a single gaze on writing, and literature and the topics they talk about; perhaps it is important to have these many eyes and add an amorphous state.

I do not subscribe to the idea that African Literature should be stuck in the boundaries of Africa. By this I mean, the enjoyment of “African Literature” cannot be limited to African eyes. The questions that floated in many of the sessions during the festival were to do with whether anyone apart from Africans had the right to contribute to this story. Whether through publishing, awarding prizes, contributing to discussions and more.

You realise that sometimes the argument goes further and asks, should people in the diaspora be allowed to contribute to this thing called African Literature?

In fact, a lot of the discussions during the festival seemed to place “white” interest in the African story on trial. Book launches, panel discussions, seemed to struggle with this idea of “African” and “Literature”. The recurring theme seemed to be decolonisation.

“Some people think they know Africa by watching Blood Diamonds.” (Professor Makokha on the meaning of African Literature).

While that argument continued, that did not stop the enjoyment of this amorphous thing. The readings were well attended as new books were launched. From Long Story Short readings, to Gambit: Newer African Literature, Bahati Books readings and more. Panel discussions on literature in different areas like law and education were quite engaging. Not forgetting performances like Harriet Anena’s “I Bow for My Boobs” and Maimouna Jallow’s “The Secret Lives of Baba Segi’s Wives”.

That aside, I’d think I gleaned a lot from the experience of the international speakers as well, many who came from partnering universities and organisations.

One thing many literary activists forget is the younger people. We’re very keen on establishing connections with other writers, publishers, possible donors, sponsors, etc but forget those in the schools still getting acquainted with books and reading. It is why I think the school visits in this year’s edition were a good idea. Afrikult had come along from London to also engage in these connections and surely had there been better access to the students, we’d have had a great outcome altogether. 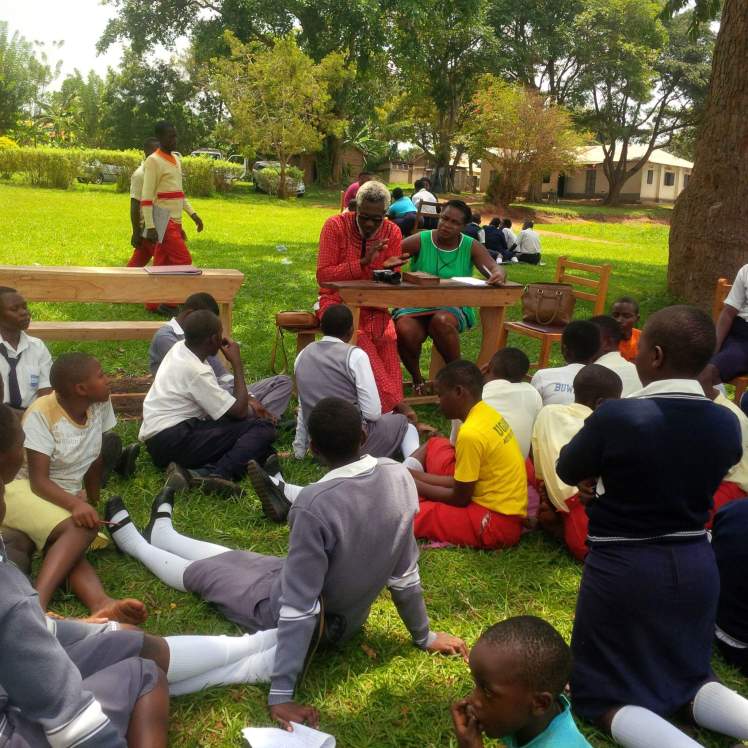 Congratulations to the winners in this year’s event – Redscar McOdindo who won the inaugural Okot p’Bitek prize and  Acan Innocent Immaculate who won the short story prize and took home USD 500 each. I intend on getting myself “A Season of Crimson Blossoms”. Abubakar’s book seems to be a continental favourite.

Shout out to the Kenyans, Magunga, Kilolo, Jaguero and group, you made up for the modesty of the Nigerians who were around this time!

As a struggling writer, it’s surreal being surrounded by all these accomplished and emerging writers and publishers. Michela Wrong, Zukiswa Wanner, Julius Ocwinyo, Shaun Randol, Ayobami Adebayo, Oduor Jagero, Sitawa Namwalie,  Louise Umutoni, Nyana Kakoma and more. I was glad to be introduced to writers I may not have known about from the southern part of Africa; Panashe Chigumadzi, Katlego Kol-Kes, Yewande Omotoso. This boiling pot of literary consciousness seems to keep being stirred and gets hotter each year at Writivism.

Next year there should be a panel on how not to get broke buying books! It was like being a kid in a candy store with only a UGX 100 shilling coin.