My three days at Writivism, that is Day 1, Day 3 and Day 5 could be summed up in three words. Decolonisation. Books. Women. The argument for Decolonisation, why you need to read and why you should heed the women.

I’ve not been to a literary festival outside Uganda but the one thing I am learning about Writivism, is the human aspect. Human aspect in that it is not a conceptual festival that only concerns itself with the literary but with the forces behind the literary; that is the people, their issues and their challenges!

Andrea Stultiens’ book launch “Ebifananyi 6: Duc in Altum” surely caused some controversy. From my point of view, part of Andrea’s focus was the power of the image. In all of History in Progress’s work, the image is the primary vehicle in transporting people back in time.

However this time, the issue of colonial education came up and mostly it’s demerits. Former students of Namagunga, starting with Rebecca Rwakabukoza, noted the absurdity that they were not allowed to run (even in the rain) or jump over desks because they were being taught how to be ladies. Dr Connie Nshemereirwe posited that  colonial education made learning inorganic and unnatural by transplanting one from their natural environ into a classroom. Eria “SANE” Nsubuga who also noted its demerits had begun with the fact that it was an ambivalent topic. Several people were ready to stand up for the rights of Africa and how the continent had been wronged. It was hard to stand and defend the merits of colonial education because there was an air of militant Pan-Africanism taking over. Canon Rumanzi was one of the people on the other side of the fence declaring that one needed to do what they liked. (He seemed to infer that if one wanted to be a queer non-Pan-African African, let them be.) 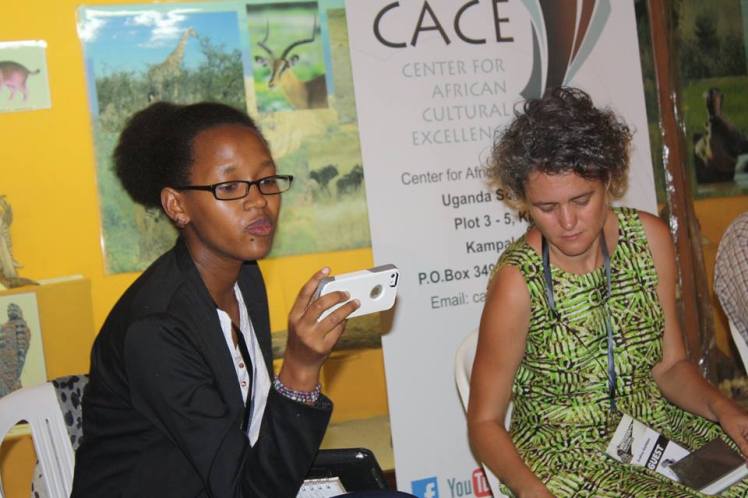 All I can say about the book launch was that I appreciate the form Andrea chose to share our history. It is ironic she is the one, she and Canon, taking time to document these things. The question is, without images, wasn’t Africa bound to lose her history that was normally transmitted orally?

Zukiswa Wanner’s Keynote address on Friday also talked about Decolonisation. In this case, of African Literature. The idea that one cannot access African literature in Africa, or one cannot be called a good writer but a good “African” writer, or that one must pander to “white” preferences to be published.

There was a double book launch on Wednesday. “A Death Retold” by Grace Musila and “Sweet Medicine” by Panashe Chigumadzi.

If anyone should be appreciated at the book launch, it was surely Bob Kisiki. His colloquial tone and humour, defensive moderation gave the launch a light heartedness while maintaining its seriousness. Grace Musila was not in attendance but the key thing about the discussions was the inescapable fact of higher forces working in which we are pawns and not in a religious way. It is about the politics of the day.

Panashe’s demeanor is of a no-nonsense woman. However it was interesting to note that her book -delved into grey areas of life. How do the victims of a system survive under it? Is it enough to talk about things like patriarchy and forget the survival mechanisms of its victims?

The Readers’s Choice Awards showed one thing. The Nigerians are writing. But let’s first get to the Ugandan classics. Afrikult facilitated this session and it had two parts. An award for Ugandan Classics and African Favourites.

Let me say I was relieved and proud to have read 4 of the 5 Ugandan classics; Nansubuga Makumbi’s “Kintu”, Okot p’Bitek’s “Song of Lawino”, Doreen Baingana’s “Tropical Fish” and Peter Kagayi’s “The Headline That Morning”. Julius Ocwinyo’s “Fate of the Banished” is on my to-read list! Needless to say Kintu won this award for obvious reasons. It’s an immensely enjoyable book.

All the shortlisted African titles were Nigerian. Surely they should send us some Jollof because we need some of that literary energy going around. The nominated titles were: Americanah by Chimamanda Ngozi, Black Ass by Igoni Barrett, The Fisherman by Chigozie Obioma, The Secret Lives of Baba Segi’s Wives by Lola Shoneyin and the winning book Season of Crimson Blossoms by Abubakar Adam Ibrahim. I have a lot to read as regards Nigerian literature yet.

A lot of the conversation in literary circles always revolves around women. Or let’s say gender. Panashe’s Sweet Medicine addresses it, and she happened to be on the Sexual Harrasment panel on Friday. One thing must be noted. Men are learning about gender issues and the voices of the women at the talk were loud and clear about the men needing to take responsibility. It was also noted that  women also need to understand the subliminal contribution to a system that doesn’t victimise only them.

We got a look into the things that have made FEMRITE remain a force 20 years later. Clearly the Hilda’s of this world are doing a good job contributing to endeavours like those of Harriet Anena, Jackee Batanda, Beverley Namboozo and Nyana Kakoma.

Of course there are more than three things to Writivism. The weekend had more in store.