By Joseph Omotayo for Afridiaspora

….a gambit is an opening move, one that takes risks and accepts initial setbacks to establish a long-term winning strategy. – Shaun Randol

The game show we attempt to contravene is one that thrives on the immediacy of acclaim, one that judges a writer’s impact by the fervor on social media – Emmanuel Iduma

Gambit is a collection of thought-searching interviews and interesting short stories. These interviews are series of interesting conversations between Emmanuel Iduma and emerging African writers. These writers are home-grown. The book is made up of interviews done with nine writers. Of great excitement is that short stories accompany these interviews. These are original stories never published anywhere before. The combination of these writers’ interviews and their stories makes Gambit a science of some sort. Call it the science book of emerging African writers. Thoughts run unfettered in this book. This is beautiful. If science is the digging up of facts and the application of same, then this book is science. Every interview deepens the understanding of the writer, their writing and locale. Literature has never been more interesting. This book is the sum-up of a writer’s thoughts on everything: their struggle and fight for visibility. This book is a gift. You should have it.

What this eclectic book seeks to achieve is one: to deconstruct the centrality of Western validation to the success of an African writer. In doing that, Gambit packs curiosities and answers in one. No questions are left unanswered. It raises questions and answers them. These interviews spur timeless discourses. Done in 2012, four years after, issues raised in these interviews still remain significant. The question of visibility for emerging African writers is a serious thing. This book is multi-dimensional. This is one way you can describe a book that throws up cataclysmic questions and answers them. Gambit wants to draw ‘emerging writers’ into lime light. This book confidently attempts to reduce the significance of Western empires. This book seeks liberty for all (how many?). It wants to decentralise into democracy. This book wants to do so many things. But did it achieve all?

Caught in the irony of its cause and struggle, the platform that gave support to this project is based in the US. Postcolonial attempts as this have always been mired in the quagmire of subtly promoting the centre they fight against. Organised attempts as this at breaking hegemonies first acknowledge the power of such hegemonies and in a way reaffirms it. It’s such a cyclical confusion. In weakening the centre that Gambit seeks to deconstruct, Gambit, by the siting of Mantle (its publisher), partially shoots itself. This is not a peculiar setback to this project. It however only makes Gambit postcolonial. The postcolonial has never successfully come into its own without leaning on the colonial, on the same Western organised structures it wants to take down. Ask Kwame Anthony Appiah, ask Edward W. Said, ask Homi K. Bhabha, ask Gayatri Chakravorty Spivak, ask Abdul R.JanMohamed. In fact, ask all of them. These scholars all leaned on the organised structures they attack. They were once beneficiaries of such structures. 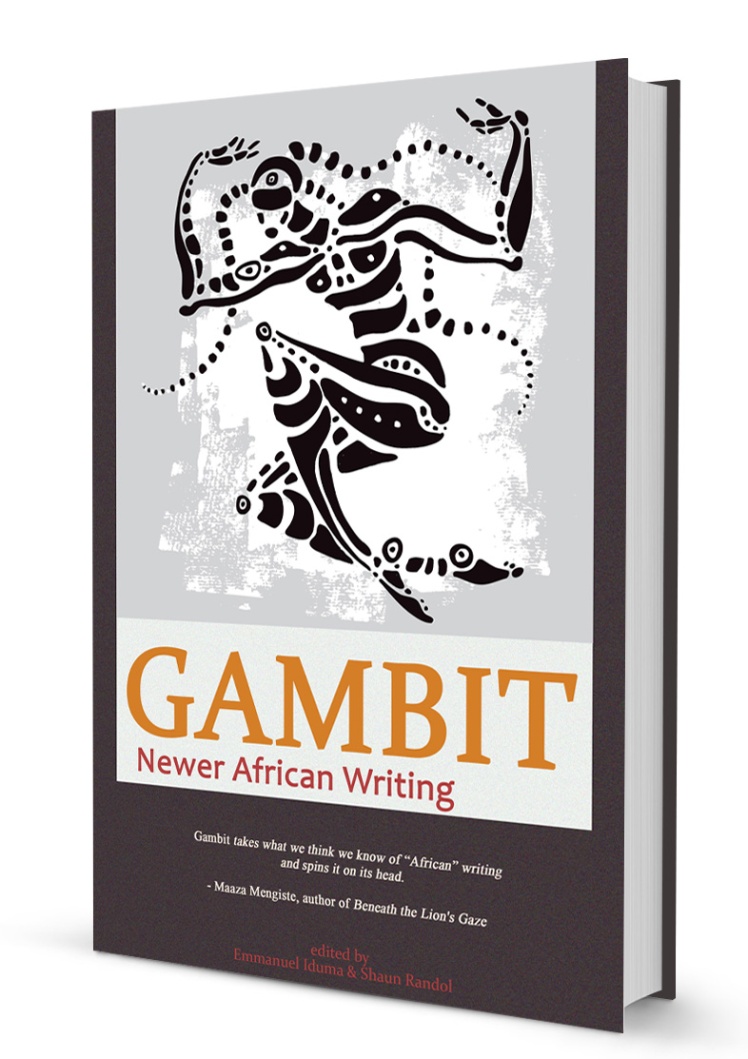 Gambit is an assertive project. This makes it so admirable. Anyone interested in African literature should get this book. Students of literature should read this book. This book should be on our colleges’ curricula. Unfortunately it isn’t. Gambit offers a trajectory of the writers featured in the book. So many things have changed for these writers since 2012. Some have been shortlisted for great ‘Western’ prizes or touring ‘Western’ cities (for validation?) (f)or global visibility. These writers are now taking their fate into their hands. Structures here will never help them, except in few organised African countries like South Africa. There has been growing discontent among emerging African writers, especially those who are at the margin, those without access to the literary organised institutions of the West.  Gambit then wants to bridge the gap between the relative unknown and the renown. The strongly willed consciousness and assertiveness Gambit uses to do this are what Ashcroft et al identify about post-colonial literature as this:

“Post-colonial literatures developed through several stages which can be seen to correspond to stages both of national or regional consciousness and of the project of asserting difference from the imperial centre.”

This book therefore seems to plead the case of writers without the agency of voice (validation?). Or showcase their grief as the marginalised. One can now say they can now finally speak (see Gayatri Chakravorty Spivak’s Can the Subaltern Speak?). Of the many interviews in this book, I found Rosa Tshuma’s interview frank and thoroughly honest about the significance of the West to African writing. Read her speak so passionately here:

…We may then be honest about the relationship between the African writer and the West. Let us not fault the West for her excellent writing schools, her rich literary industry, her well-cultivated readership. The significance of her literary prizes, how they have the power to, literarily, like a magic wand, transform a writer’s career. All of this has benefited the African writer: many of the African writers who flourish are based in the West. This is perhaps a reflection on our hostile literary industry in Africa, how it is difficult to survive as a writer in Africa. Yes? (pg. 226)

She goes further. Here, she voices my thought on the significance of the Western structures we so deride only when we have benefited from it:

…But let us not be so sullen about the West in terms of the African writer, because opportunity is indeed a generous thing, trickling down, invariably, to the source: the African writer goes to the West, is afforded the opportunity and resources to hone his or her craft, produces some stunning work, wins some accolades, becomes a writing beacon. And then look—something like a Farafina Trust is born in Africa, something like a Kwani?, affording space, opportunities, and resources for the writer within Africa, remapping Africa’s interactions with her own literature. (pg. 226)

The writers easily command wisdom. Rarefication of the most common experiences gives them some ethereality. Everything is elevated to sweetness, so the familiar can shake you and teach you anew. Read how Dango Mkandawire philosophises about life here:

The frustration we all face stems from our attempt to slot ourselves into the society without being swallowed whole and suffocated by it, or to withdraw from it sufficiently enough freezing from the cold. (pg. 160)

On being an emerging writer, Dango Mkandawire speaks briefly about the freeness of it all:

Being labelled an “emerging writer” (if that is what I am labeled) would exclude me from a lot of responsibility, and the lack of responsibility in the early phases of anyone’s growth is a welcome and necessary part of a healthy evolution. Responsibility can breed bitterness. Ask all those who found themselves in a position where they had to assume it before their time. Even if they end up succeeding against the odds, they lose the glimmer in their eyes.

The accompanying short stories in this book are necessary spices. They differentiate Gambit from piles of interviews quickly cobbled into books with ready ISBN’s. These stories are a reader’s delight. I will talk about some. Read to know the rest. Dami Ajayi’s Talk to Me shows the anti-socials new communication has turned us to. Dami Ajayi writes from a familiar space. I can relate with this:

Do you remember the night that we walked into the desolate ruins of the former Faculty of Agriculture? That night you chose not to wear underpants, and just as we got to the topmost floor, after climbing the rather shaky stairs, you lifted your dress above your waist and lunged at me, with your body, the glistening of your lips. And when our bodies touched, you sighed and moaned.

We made love, your hands fastened to the wall, your body hunched so that I took you from behind. I observed the aerial view of our university, like a pilot observing the ground on which to descend, its outlay sprawled for our benefit. We ravished ourselves through several orgasms and left the place spent.

Sorry you can’t fully appreciate that. You only could if you schooled in the same setting of that story. Abubakar Adam Ibrahim is a master at chronicling pains. Have you read his Season of Crimson Blossom? Here, Daughters of Bappa Avenue will leave you distraught. Rosa Tshuma’s Telepresence relates the confusion of an academic, of love found in cyberspace and of the thingification of women.

There is one thing Gambit really does well for us; the art of writing and the heart of the writer are bared. No holdback. Everything flows freely. This is not another journalese where writers vet, verify and chalk out interesting parts of their thoughts; where everything about their writing starts from writing fiction when they were two and reading Achebe and creating African characters when they came of age. Gambit gives us real conversations. Gambit is something real, something that does not always come to you. In this book, there is a close-up encounter between the writers and readers. These interviews are crispy and frank. If a discourse is what ‘Yomi Olusesun-Joseph claims it to be; that “…complex grid of power relations inscribed…propelled through the mechanism of the linguistic sign.”, then Gambit has pulled off a timeless necessary discourse in African literature.

GAMBIT will be available at the 2016 Writivism festival in August.

This review was first published at Afridiaspora.com as part of the Writivism 2016 Festival Partnership.