At the airport on my way out of Lagos to South Africa, the boisterous man beside me was having a loud conversation on the phone. He spoke loudly and made eye contact with me, actions that made me suspect it was both private conversation and public entertainment – our entertainment. His conversation meandered but at some point he said something that I would later write in the first journal I’ve been able to keep: I’d rather stick to my own destiny.

Now, whether or not I believe in destiny isn’t important. What is important is that I submitted “Caterer, Caterer” for the Writivism Short Story Prize in 2015 and it won and then there I was, going to Stellenbosch, South Africa for a month to just… write. Before the idea of a residency became known to me, I had taken the year off to stay away from 9-5 employment – to ‘drift’ on my own terms. I might not have been able to attend the residency otherwise and so I am grateful to everything that made this happen when and how it did.

In my daydreams about how this month would go, I was lying in a hammock with my laptop, staring up at the mountains then back at my screen, my fingers slapping away with frenzied inspiration. It was not so. On my first day at the University, wearing a dress with no socks, the first part of my daydreams was shattered – it was colder than I had thought and packed for. There would be no hammock-lounging in the sun. The rest came crumbling down after I spent most of the first week staring out of the big window at the white cars (why do South Africans like their white cars?) and mountains in the distance – the keyboard mockingly silent.

There were many quiet days and the corridor to the office was long and clinical, I felt a solidarity with the Things Fall Apart poster sitting among others on the corridor wall. In the office, one of Picasso’s children stared down at me from a painting, hands akimbo as if waiting for me to write already. In my journal, I wrote: I have an office to my lonesome self. Me. Alone. In it, I read Elizabeth Strout and Jade Sharma.

A month isn’t a long time, except when you’re pining for a lover. But especially not when you’re writing fiction. And I heard this refrain many times, “A month? That’s what you need to settle in!” So, after I accepted I wasn’t going to do much new writing, I turned to editing the selection of stories I brought with me. I also decided to use the month to find new stories. And I found them.

In the taxi rides with only Blues singing between us, I found a story with Sammy. For the first week, he delivered me to the University from the quaintest cottage in Jonkershoek where two dogs wagged and barked goodbye. In my journal, I asked: Why is it so easy to form a bond, to feel bogus intimacy with a stranger that is nice to me? When a fair-haired Afrikaans First-year lad helped me with my groceries after I moved to the University flat, I went back to underline the question.

In the seminars Professor Sally-Ann invited me to, I found more stories. In the dark spaces of the lecture halls, my brain was in constant tilt, reaching out to some kind of revelation it could wrap around – but an hour always came first. I texted my friends: I think I want to go back to school. “Nothing with skin is blind” – I saw this at one of the seminars and closed my eyes, rolling my pencil between my thumb and index finger.

At the Open Book Festival, I found stories in the words of storytellers. A pensive memoirist held the microphone and paused in between sentences so we didn’t know if it was a comma or full stop. He said to us: I feel naked here, sitting in front of you. A panelist at the Fundza event at the festival was asked what her ultimate writer dream was and she said: “I’m living it, I get to travel and discuss the stories I’m reading and writing.” I whispered, Amen sister. Journal entry: It’s such a special thing listening to intelligent and conscious people talk about their work. I feel everything. 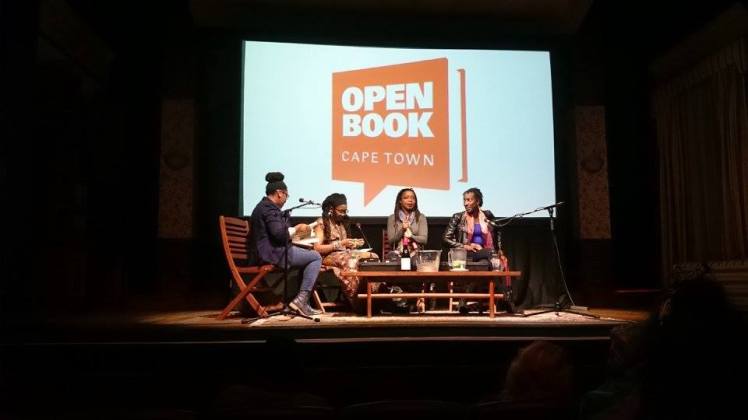 When people asked why I was in Western Cape, their eyebrows would float for a second – in surprise? Pleasure? “An author!” I would shake my head no and feel a little like a fraud. Am I an author if I have written only a few short stories? During a book club meeting where Elena Ferrante was being discussed, the members decided to read “Caterer, Caterer” along with their next book and when I became terrified, someone said to me, paraphrased: You’ve earned it. Don’t be terrified about standing behind your work. Don’t cower. I felt a little less fraudulent after that; a little.

I got a glimpse of the #FeesMustFall movement where some students were protesting the rise in school fees. Although I was affected only a little by the protests, it caused a bit of disruption to the University’s schedule. I couldn’t help comparing the resolve of the students to everyone in my home country. Do we fight for anything? Do I fight for anything?

Towards the end of my residency, the professor came in to chat with me about my work. She asked: What are you afraid to write? What aren’t you writing? These are questions I have been rolling around in my hands, kneading, trying to answer. What fears can a story fight? At one of the seminars, I scribbled down ‘what if our bodies retained knowledge?’ These are questions I am excited to explore as I continue writing in my warm room in Lagos – there might be insights from this one month residency that will only be revealed after more time has passed.

At the Lagos airport, I stood at the carousel watching my second bag go round and round without reaching out for it. I wasn’t quite sure if it was mine even though I’d packed it earlier that day. I squinted and cocked my head and finally pulled it off just to see. I felt silly later but I’m asking myself if it’s possible for one month of travel to change your eyesight – your world view.

2 thoughts on “I Feel Everything: Pemi Aguda on the inaugural Writivism Residency at Stellenbosch”