In April this year, poet Harriet Anena staged a one person show at Peter Kagayi’s Poetry Shrine. Titled ‘I Bow For My Boobs’, after one of the poems in her collection, ‘A Nation in Labour’, the show was received by some journalists in comparison to Dr. Stella Nyanzi’s protest at Makerere. 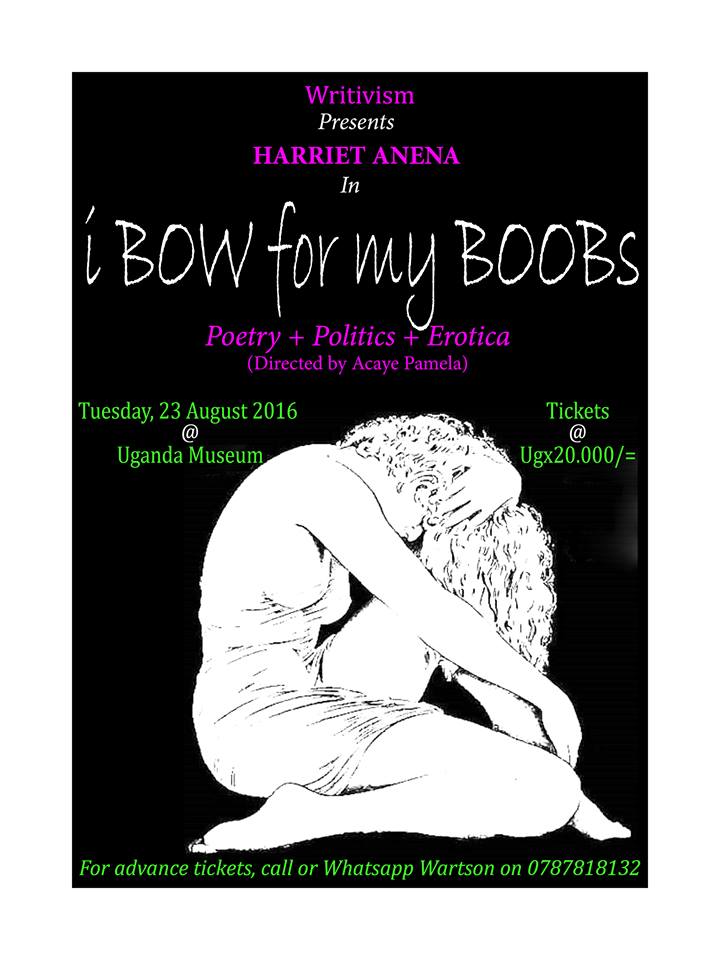 On August 23, 2016, Anena brings back ‘I Bow For My Boobs’ to a Ugandan audience. It will show at the Uganda Museum, from 6pm, prompt. It is hoped that the show will be received on its own terms without comparison to non-erotic nude protest. Having launched her book at last year’s Writivism Festival, the performance illustrates the transformation of Anena’s words from the page, to the stage, one year later.

Anena has also been a beneficiary of the Writivism programme, having attended two workshops (in 2014 and 2015), been mentored by Rachel Zadok and published through various digital publishing partners.

Show tickets go for 20,000/= each and will be on sale at the door, and in advance. The festival also has an omnibus ticket offer that grants access to four paid events, including I Bow To My Boobs.

Watch a clip from the previous show here. Find more information about the show, at the Writivism website.

On this day, in 1938, Ngugi wa Thiong'o was born in Kamiriithu, in present day Kenya. What are your favourites of his many books? We wish him a very wonderful birthday.
Happy 2020 Writivism is on a short hiatus for the moment.
Are you ready? Dust that manuscript.
The shortlist for the 2020 Dinaane Debut Fiction Award has just been announced and guess who has made it? Our own Resoketswe Manenzhe's manuscript, Scatterlings is one of three shortlisted novels for the award. We find out the winner next year. What a way to end the year. We are proud of you, Shoki and are crossing fingers you bring this home.
Take Jennifer Makumbi's warning at the start of Manchester Happened (Let's Tell This Story Properly - in the US) seriously. Tebamukubira lugambo for real. She spills all the tea about Ugandans living in the UK, you are left mouth agape on reading. We hosted Timothy Bukumunhe at #Writivism2019 #UnBreakableBonds festival, himself UK born and raised, now living in Uganda and he confirmed that the tea in Manchester Happened has the right sugar levels! You can catch up with Jennifer in Kampala today Friday December 6, at Goethe Zentrum, courtesy @trustawt and FEMRITE. 📸: @jamiempire
Events don't put themselves together, magazines don't edit themselves, blogs don't drop from sky, podcasts don't just emerge from the ground, all these are painstakingly arranged, planned and executed by the special breed of humans who go by the label, "curators". @opeadedeji was in Kampala for #Writivism2019 #UnBreakableBonds festival to meet and chat with a few curators from the region. 📸: @jamiempire