The shortlists for the 2019 Writivism Short Story Prize and The Koffi Addo Prize for Creative Nonfiction have been announced, and they include 5 of Africa’s budding literary talents. Each of the shortlists is made up of 3 stories with one writer featuring on both, which is a true mark of their excellence as a … END_OF_DOCUMENT_TOKEN_TO_BE_REPLACED

Apart from Unbreakale Bonds being this year’s theme for our activities, it is also the title of a special anthology of fiction, photography and nonfiction from Eastern Africa and the UK diaspora. The anthology is edited by Bwesigye Bwa Mwesigire, Esther Mirembe and Sumayya Lee. This anthology is a part of the activities funded by … END_OF_DOCUMENT_TOKEN_TO_BE_REPLACED

We recently began to ask ourselves questions about what it means that our prizes are only open to writers living on the continent. Our argument has always been that we do not have enough opportunities for writers on the continent. And it is true. But what does this mean for our definition of ourselves as … END_OF_DOCUMENT_TOKEN_TO_BE_REPLACED 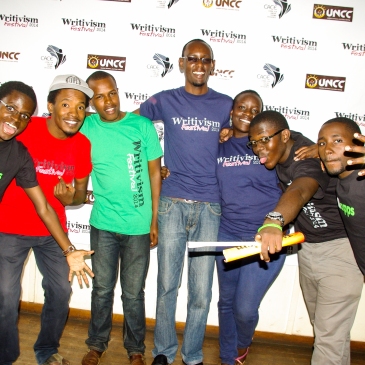 The Writivism Literary Initiative, a project of the Centre for African Cultural Excellence is looking to fill various vacancies in its staff and volunteers’ roll for the 2019 season.   Writivism is a Kampala-based project that runs two literary prizes, an online mentoring program, publishes anthologies through Black Letter Media, curates an annual literary festival … END_OF_DOCUMENT_TOKEN_TO_BE_REPLACED